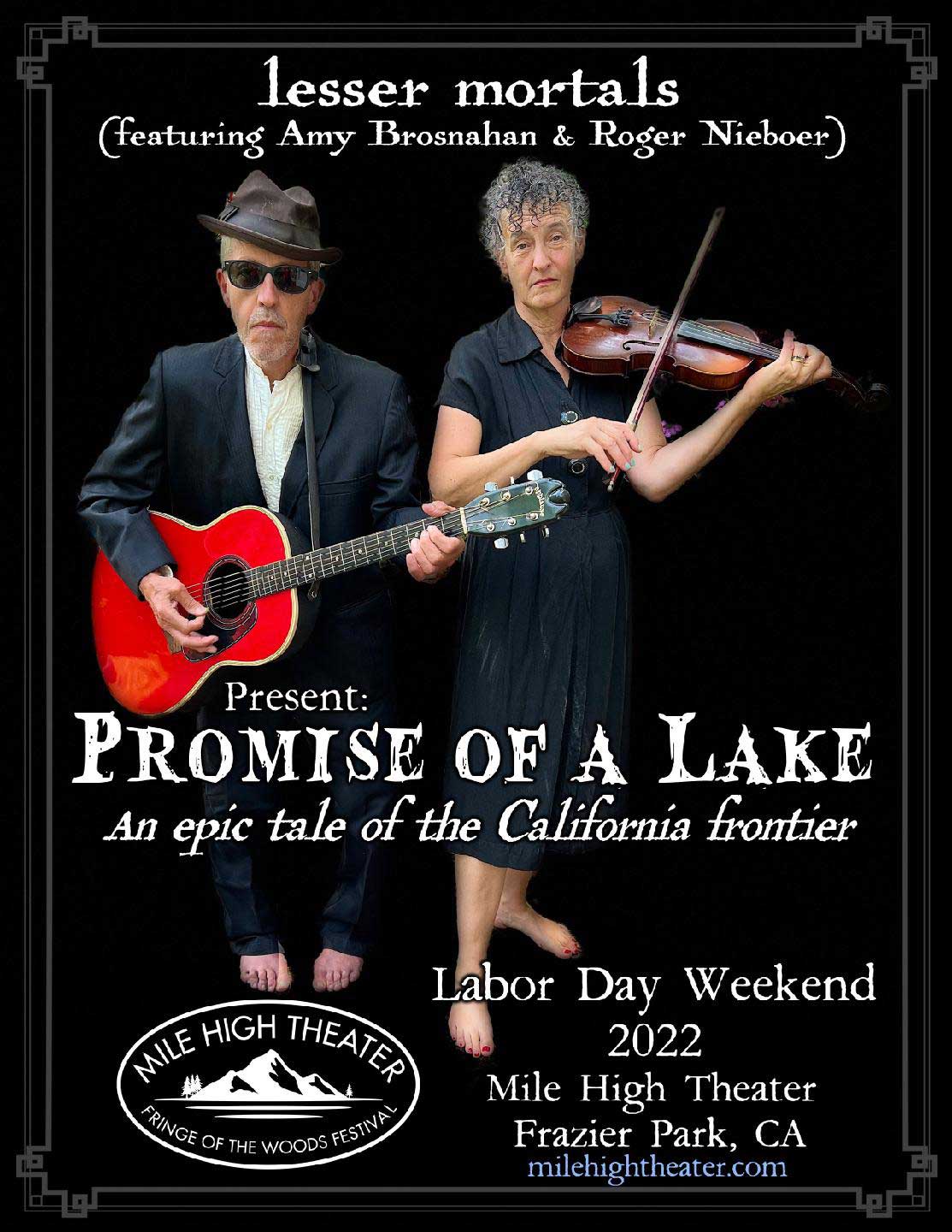 The world premiere of

Promise of a Lake

An epic tale of the California frontier

Replete with Irish fiddle, comedic interludes, and a strumming guitar

Promise of a Lake tells the true story of a pioneer family and their dream of building a lake in the mountains. Boldly reimagined and fueled by original, toe-tapping tunes, the show delivers its resonant tale of the California frontier with the customary zeal and mischievous sense of fun for which lesser mortals is best known. The 45 minute performance energetically covers the years 1858-1962.

Who are/ what is lesser mortals?

lesser mortals creates new theatre works invoking a wide array of disciplines and aesthetic approaches. Founded in San Francisco in 1984 by Amy Brosnahan, Ann Fajilan, Tom Ford, and Roger Nieboer (all former drama students at UC Davis), they immediately gained acclaim and recognition for their production of The Ballad of Johnny & Abduhl at Intersection for the Arts.

Since then they have performed at venues ranging from the Winnipeg Folk Festival to New Dramatists in New York. They have created site-specific works for train stations, art museums and vacant lots.

Most recently they created and performed a five-part series of large-scale, audience-interactive pieces (existentia, folkalopolis, marketopia, energia, and arboreous) in partnership with Northern Spark, a Minnesota-based, all-night arts festival. Each piece lasted 8-9 hours and involved hundreds of participants.

With Promise Of A Lake they return to the intimate scale and form of their first production.

What about the music?

Music has been an essential component of their theatre work from the very beginning. Described by some as “Folk-punk” or “punkabilly” and derided by others as “mish-mash”, their music aims to capture the vocal stylings and instrumentation of folk music and infuse it with the high energy and urgency of punk. As for the mish-mash, they take that as the ultimate compliment, as they consider themselves pioneers in the wide world of mash-up.

Amy Brosnahan works as a judge in Minnesota’s 10th Judicial District, and is enthusiastically devoted to Irish music.

Roger Nieboer began his theatre career at the Magic Theatre in 1983. He continues to write plays and conduct experiments in organic horticulture.